The banks of the Phoenix Canal System have become popular for biking because it is the perfect way to explore the city. While 9 canals make up the Valley’s canal system, the Arizona Canal is the longest and northernmost canal.

The Arizona Canal is almost 39 miles from start to finish. It begins at the Granite Reef dam in Mesa and flows west through the Salt River Pima-Maricopa Indian Community, to downtown Scottsdale, Phoenix’s historic Arcadia neighborhoods, and all the way to Peoria. The path ends at New River near the Arrowhead Towne Center. 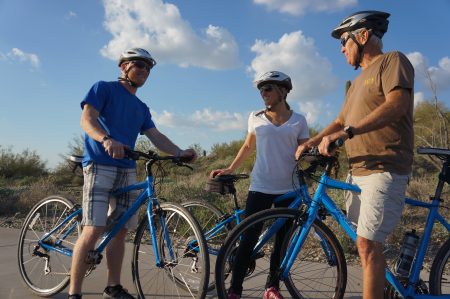 Cruise at your own pace for as long as you want

The Arizona Canal’s multi-use path is a great ride for all ability levels from families to roadies who are looking to enjoy a nice scenic bike ride in Phoenix. The 39-mile out-and-back bike ride along the Arizona Canal allows you to ride at your own pace and turn back at any point.

Much like riding your bike along the Scottsdale Greenbelt, the Arizona Canal has a plethora of start and end points as it is an out-and-back path. Staying near the Biltmore, Old Town Scottsdale, or in Central Phoenix? These are all great places to start your bike ride along the canal. The trail also connects to other trails along its route, including the Southern Canal Path, Cave Creek Wash Trail, Indian Bend Wash Greenbelt Trail, Old Cross Cut Canal Park Path, Crosscut Canal Path, and Pima Road Trail.

Rent a Bike For Your Ride!

This may be one of the most car-free, urban bike paths you can ride in the Phoenix-metro area. There are multiple underpasses and bridges to help avoid major intersections and streets. The Arizona Canal bike trail is paved at times and unpaved at others, but with a level path a majority of the way there is no need to switch gears or ride on special tires– just cruise!

See Phoenix in a New Way

A true urban bike ride, this wide waterway cuts through multiple neighborhoods, parks, and commercial districts full of restaurants, businesses and shopping centers. Many locals use the canal trails as their daily commute to work!

Our favorite route for biking the canals starts from the Sanctuary Resort, hugs the canal along Indian School Road and loops around through Arcadia’s historic brickhouse neighborhoods and restaurant corridor. Along this route you can take a break along the 32 acres of Camelback Park, stop at Arizona Falls, a 750-watt hydroelectric plant that has been designed into a beautiful man-made waterfall, grab a great lunch at OHSO Brewery, enjoy the trail’s public art installments and catch amazing 360-views of Camelback Mountain as you ride around it.

Are you ready to cruise along the Arizona Canal? You may need a bike and helmet first. Check out our recreation bike rentals here.