The oldest state park in Nevada, Valley of Fire State Park is characterized by its red sandstone formations. At sunset these rocks bear an uncanny resemblance to a valley literally on fire, hence the name. Hikers, campers, cyclists and even movie directors have found something special about Valley of Fire State Park since its designation as a National Natural Landmark in 1968. This is in part due to the stark contrast of wide open desert landscape and the sudden interruptive tangles of vibrant red rock formations and petroglyphs. In addition to geologic marvels, the park is rich in flora, fauna and human history. Desert marigolds and indigo bush awaken in the springtime, joining the abundant stands of beavertail and cholla cactus. Archaeological sites throughout the park are evidence of the early pueblo cultures that called Valley of Fire home. This area is far enough from the city of Las Vegas to have an identity of its own, but close enough to be easily accessible by anyone attracted to the area by Las Vegas. 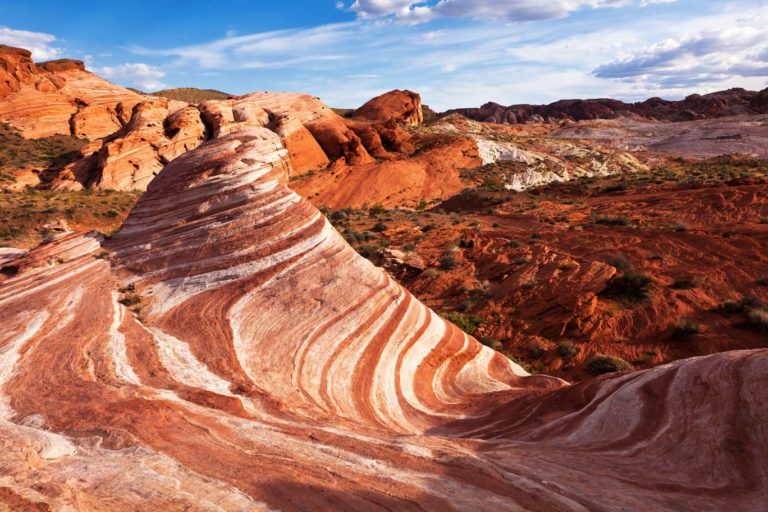 Getting to Valley of Fire

The commute to Valley of Fire State Park from Las Vegas requires about an hour of drive time, but it’s pretty straightforward. After taking the I-15 North from Las Vegas for about 30 miles, turn onto Valley of Fire scenic byway for 15 miles and enter the park from the northwest near the Fire Wave. There is one main road through the park that can be driven as a scenic loop. You can drive to most of the well-known trailheads and rock formations along the same road. If you are looking for a more scenic drive to reach the park you can also reach Valley of Fire via Northshore Road (highway 167) through the Lake Mead National Recreation Area. This option may be a shorter distance from Henderson or Boulder City, Nevada.

One of the most photographed places in the Valley of Fire, the Fire Wave is a series of rings in the red sandstone. Past the visitor center you will come across the 1.5 mile fire wave trail that brings you to the swooping outlines of the fire wave.

Continuing past the Mouse Tank Road turn off on the Valley of Fire Highway brings you to Elephant Rock. Named for the apparent shape, Elephant Rock is far less traveled and photographed than other “fire” features scattered throughout the park. 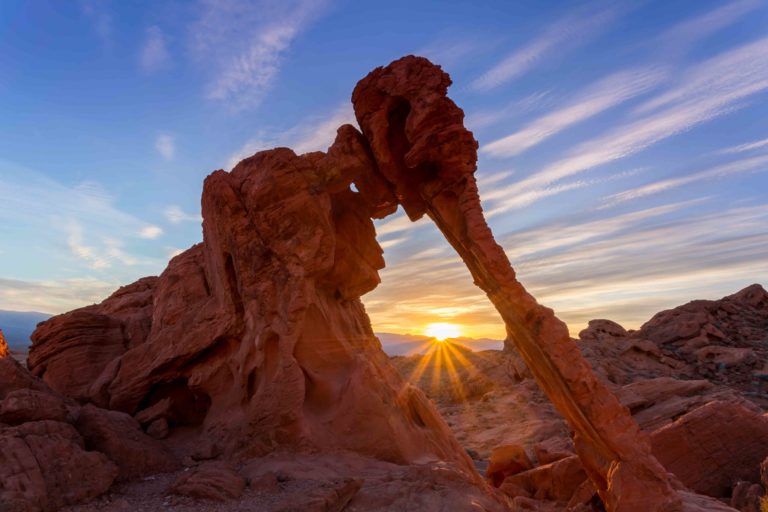 The beehives are one of the first features to greet visitors upon entering the Valley of Fire State Park. The unusual sandstone formations make for spectacular photos, especially with the Muddy Mountains off in the distance.

This massive petroglyph panel draws many photographers but even a less artistic eye will marvel at it. Atlatl rock allows visitors an up close look at the carvings that the ancient puebloan people etched into the rock, accentuated by desert varnish.

Hiking in Valley Of Fire

Hiking is the most popular activity for visitors of Valley of Fire State Park, with each geologic feature offering a short hike to survey the area. Prepare for a full-day hike on a less traveled trail or spend the day on the road stopping to hike to each viewpoint, both are great ways to explore the park and its many scenic views. Take a look at our list of 5 Can’t Miss Hikes in Valley of Fire State Park. 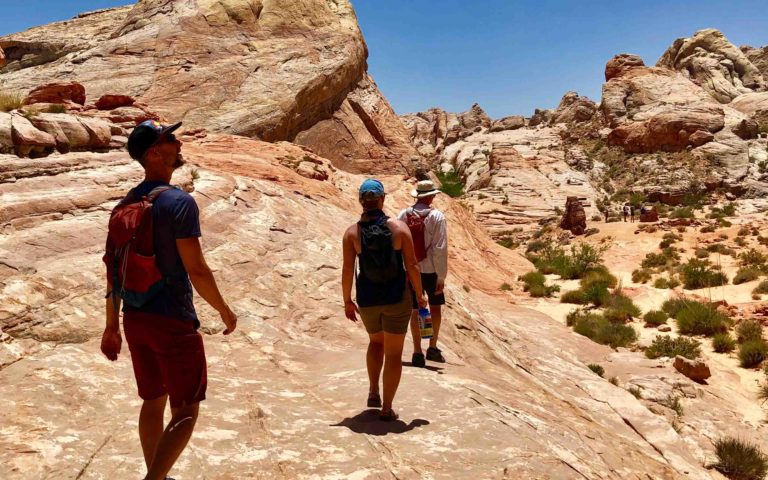 Looking for a place to hook up your RV, spend the afternoon picnicking, or in search of some ADA accessible trails? Valley of Fire has all of these and more. There are multiple campground options including large group sites. The group sites are the only ones that you can reserve in advance, this must be done over the phone. If you’re hoping to snag a “first come first served” non-group site for camping in Valley of Fire, keep a plan B up your sleeve as these sites can be a hot commodity during the cooler months from October to May. For general questions about the park or tips for exploring, the visitor center and interpretive space is a thorough resource on everything from birding tips to historical information. Check out the park website for current information and updates about available amenities.